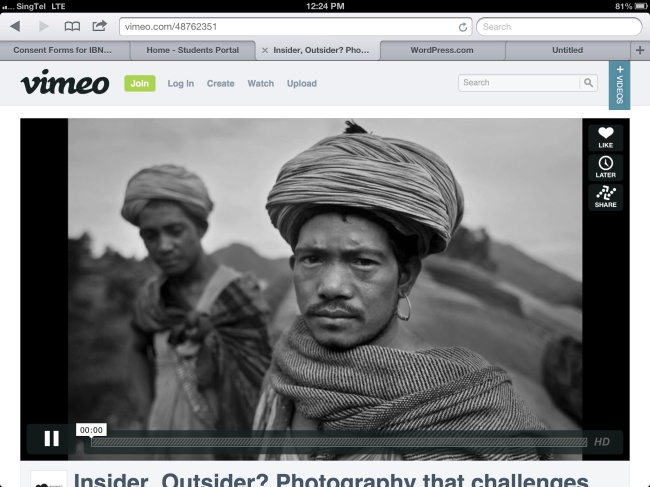 Most of the shadows of life are caused by standing in our own sunshine.
Ralph Waldo Emerson

While our perspectives are shaped by what’s around us, sometimes all that blocks us from the truth is we ourselves. As an outsider, we will not be impeding the truth with our own biasness and experience and hence be able to determine and ascertain truth, symbolised by ‘sunlight’ here, with more ease.

Being a photographer, each and every one of us have the power to depict a moment of a place or time which will in turn reenact the very scene or distort it. Considering the immense capability of a single photo to either make or break, a major question to be raised now is who then is a more suitable photographer, an outsider or an insider?

An outside photographer could be defined as a person or party who has minimal involvement in the subject of his photography. This means that the person does not live in the place being photographed, does not have personal involvements in the happenings in the area, and has not done much research on these happenings that could potentially divert his stance on the issue to a particular side. An insider would be the opposite of this, with significant personal involvement in the issue.

Being a relatively neutral party, an outsider is in a better position to photograph a place. It can be assumed that an insider is one who has previous insights of a particular location, whereas an outsider does not have prior exper lbience with regard to a place.

Because an outsider takes on a more neutral stand in the particular subject, the photograph may not be framed through any personal perspective that may result in any incredibility. If an insider were to take a photo, he may consciously omit extra details from the photo and possibly force a perspective into the audience. He may also subconsciously omit details that he assumes is unnecessary and obvious due to his familiarity with the place, when in fact, the truth is that the audience has no idea or clue about it. In this case, an outsider will prove to be more suitable.
In addition, an outsider has the tendency to take note of trivial details more carefully. Due to his lack of familiarity with the area, he will have to be more observant, and is likely to take a photo that is more adequate in providing a more holistic view of the place. An insider would probably be less careful and observant as he is already familiar with the place. Hence, he will probably assume that he knows a lot about the place and tend to omit what may be important but not very obvious. This once again, proves the point of an outsider being a more suitable photographer.

Last but not least, an outsider lacks the prior knowledge to the place which may prove to be helpful in giving unexpected or uncommon insights and interpretation of certain observations. This provides a more unique and out of the ordinary point of perspective by the photographer.

All in all, a photograph shot by an outsider would be a more appropriate and wholesome one in giving an overall outlook of the place. He is also able to complement it with a third party perspective of the place which would definitely differ from that of an insider.