With waves of Korean pop sweeping across Singapore, there is an increasing number of teenagers falling head over heels for Kpop idol groups. How has k-pop influenced the lives of these children, then, and what implications does it have for their parents? Despite the entertainment that kpop provides for these teenagers, parents have found that the negative influence in the aspects of studies and finance is what makes kpop undesirable.

Kpop negatively influences teenagers’ thoughts about studying. As teenagers catch their idols online every day, they think that as long as they can sing or dance, they will earn big money and become famous. They feel that being an idol is an easy way out in life – being famous and also able to earn large amount of money while doing something they enjoy. Watching kpop videos and fantasizing about performing on stage takes up a large percentage of their time. Even after settling down and doing their work, they might not be focusing and rather, have their minds drifted off to their favourite idol groups. Less effort is spent on their school work and as a result, they tend to get low grades in school. It would be natural, then, for parents of k-pop fans to worry for about their children’s future. In Singapore, a highly competitive country, bad results equate to no future. These teenagers do not see the full picture of their idols’ tough lives, only blindly dreaming about being an idol themselves. Their studies are neglected and hence compromised. Therefore, kpop negatively influences Singapore teenagers’ thoughts on studies.

It also doesn’t help that these teenage fans splurge on kpop merchandise, burning holes in their parent’s pockets. They are negatively influenced to spend money to support their favourite idol groups. For instance, they spend around twenty dollars on each album released. Addicted fans go overboard and spend over a hundred dollars to buy numerous copies of the same album. Once in a while, when their favourite idols hold concerts in Singapore, they jump at the chance of seeing their idols up close and willingly fork out hundreds of dollars to get good seats in the concert venue. Spending parents’ hard earned money on such superficial items is considered a negative influence on these teenagers. 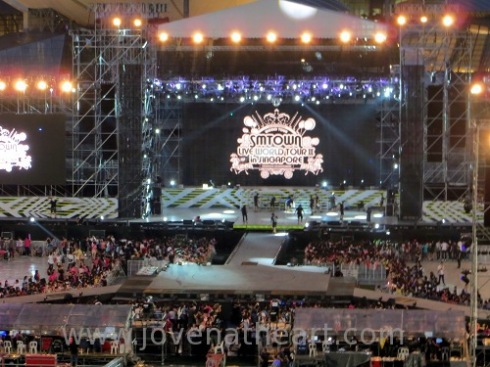 The most expensive standing tickets (as near as 1m away from their idols) are priced at $242. (img source: http://jovenatheart.com/wordpress/2012/11/25/sm-town-live-world-tour-iii-in-singapore-2012-post-mortem/)